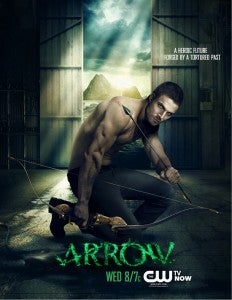 In a new interview with the local newspaper near where Arrow is shooting in Vancouver, series star Stephen Amell has some words for fans who are using similarities to Christopher Nolan's Dark Knight Trilogy as a criticism of the hit new CW series: So what?

"The idea was to make it real," Amell told the Vancouver Sun. "As real as you can make it. Now, I understand it’s TV and fantastical things are going to happen but as real as possible and that naturally takes you into the Chris Nolan universe.  If you want to be snarky about it you can say, ‘Well, they’re copying Batman.’  Batman works!"

The reporter astutely noted that The Dark Knight Trilogy was so successful in part because it incorporated big chunks of the comic books's mythology into the films, imbuing the movies with a grit and authenticity that the previous Batman franchise lacked and giving fans of the comic something new to be excited about and an opportunity to speculate about what we might see in each subsequent film more than any series before it. Amell told the Sun that Arrow is chasing that same feel.

"We’re basing large parts of Arrow on Green Arrow: Year One," Amell said. "In Green Arrow: Year One there are tons of people on the island, he gets hooked on heroin, people leave him for dead, really awful things happen to him and I think people want to see a superhero that can be injured. People want to see a super hero, I think, who is emotionally fragile; that had to make real sacrifices."

Amell admitted to being only a moderate comic book reader, enjoying things like Spawn and the Death of Superman stories but with no real connection to Green Arrow before taking the part. That said, it's interesting that he referred to DC Entertainment Chief Creative Officer Geoff Johns as the guy "who runs DC."

"Seeing how well [Johns has] done, one of the reasons he’s done well is because he’s a fan," Amell said. "So I think it behooves me to be a fan too."