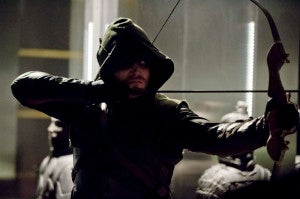 Appearing at Fan Expo Canada last weekend, Arrow star Stephen Amell told an audience at his Q&A session that while he's not thinking very much about a prospective Justice League movie, it would be great to be invited when and if one happens.

He also made some remarks that some fans will likely take as a signal that the TV universe being created with Arrow and The Flash will tie into the forthcoming Batman vs. Superman movie--a question mark that's been hanging over the productions for a while--although that's actually pretty far from what he said.

Asked about appearing in a Justice League film, Amell said, "Being in it would be fantastic. I don't know when they're going to do it but we'll take things as they come. One thing that is a personal thing for me as an actor--I tend to get annoyed with other actors when all they talk about is what they're going to do while they're on hiatus. Now, a Justice League movie is a little different because it's the same character and it's a natural extension but my first priority and my first responsibility is to the show because we have to do 23 episodes a year and they all have to be awesome."

Arrow Star Stephen Amell: Justice League Movie Would be a "Natural Extension" of The Show