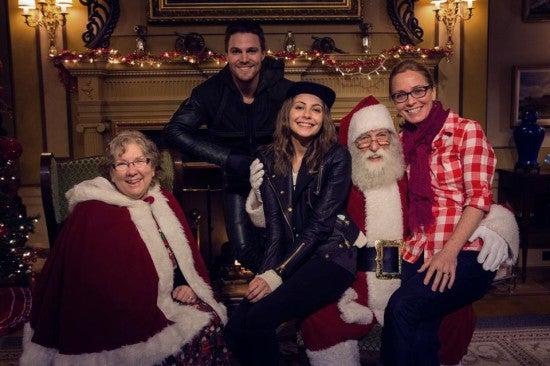 star Stephen Amell recently said that he'd go Facebook-dark for the holidays, but he can't seem to help himself updating from time to time.

For instance, after the Arrow holiday party, he posted two photos of himself with Santa and Mrs. Claus - one with the Arrow accounting department, according to the caption...and one with his onscreen mother and sister, Susanna Thompson and Willa Holland. That one--which we'll call the Queen family's Christmas card--can be seen above, and was posted with the caption "Merry Christmas from the Queens!!" and the note below, "(Thank god Thea's Dad isn't in the photo.)"

He's also scheduled to appear on a pre-taped interview with Quiver: The Green Arrow Podcast, which will run on Christmas Day.

When he recently asked fans on his Facebook page which Arrow podcast they most enjoyed, Quiver was the runaway pick. He reached out to the co-hosts on the social networking site to request they interview him, and then the interview was recorded locally and will run as both a YouTube video and an MP3 download on Christmas.

"Facebook! Because I love you, I've got a special Christmas present for everyone," Amell announced the show. "This Saturday I did a video podcast with the fine folks at Quiver: The Green Arrow Podcast -- We talk for almost an hour about everything from Season 2 to the DC Cinematic Universe. Look for it on Christmas Day! I'm currently drinking Egg Nog, by the way."

Hmm...Amell talking about the DC Cinematic Universe? That could be interesting.