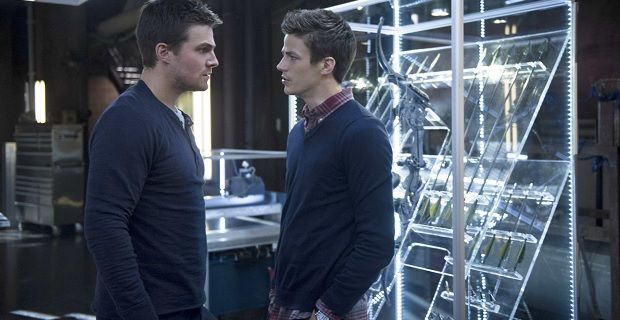 Just because Barry Allen sped out of Starling City at the end of last night’s “The Brave and the Bold” Crossover, don’t expect the Scarlet Speedster’s presence to dissipate from Arrow quite as quickly.

In an interview with The Hollywood Reporter, Arrow’s executive producer Andrew Kreisberg revealed that Central City’s protectors will now factor into Team Arrow’s adventures, if in an indirect way. As viewers saw on last night’s episode, STAR Labs’ Cisco and Snow are now actively helping Felicity Smoak in her forensics investigation into Sara Lance’s murder.

The Flash’s gifts won’t end there. According to Kreisberg, “There’s a couple of big STAR Labs inventions that will be coming Team Arrow’s way.” Indeed, Cisco already left Arrow with a lighter, and brighter, green tunic for his war on crime, suggesting that Arrow is continuing on his path towards becoming a traditional superhero.

But the one thing Arrow won’t adopt from the the Flash? That show’s optimism. Though the Flash crossover was a brief respite from the show’s normal gloominess, next week’s midseason finale will go back to form as a brooding study in vigilantism.

“The smile you saw on Oliver's face? It lasts for about four seconds in the next episode, and then it's gone," Arrow actor Stephen Amell said.

As The Flash continues to affect the world of Arrow, it will be interesting to see if Arrow will hold any further weight for The Flash.

Arrow’s midseason finale airs next Wednesday, December 9th, at 8:00 p.m. on The CW

Arrow: "The Brave & The Bold" Crossover Will Have Lasting Ramifications