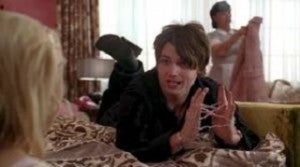 Seth Gabel, the Fringe and Dirty Sexy Money actor who plays The Count, the first season's big bad in Arrow, says his version of the comcsi villain/antihero Count Vertigo is being approached very much like Cillian Murphy's version of Dr. Jonathan Crane from The Dark Knight Trilogy.

"I knew right away that they were doing an adaptation of the character," Gabel told I Am Rogue. "In the original comic book series his name is Count Vertigo and he’s a guy of eastern European decent. In this, I play a street thug/drug kingpin and instead of having super powers, whatever super powers I may have get manifested in the form of a drug called Vertigo that I found in the street of Starling City. I’m using that to acquire money, power and psychologically disturbing citizens of Starling City so that I could eventually take over."

Asked whether his character would function essentially in the way that Scarecrow did in Batman Begins--simulating super-powers using pharmaceuticals, the actor agreed.

"Yeah, that’s exactly right. With that said, I wanted him to have special abilities in some way. I really wanted to make sure that he had a physically intimidating presence on the street and that whoever he goes up against; he ends up being a very worthy adversary for them."

This is, of course, not the first time that Arrow has been compared to Christopher Nolan's Batman trilogy. Star Stephen Amell, when confronted with the similarities, told a reporter back in October that he doesn't take those comparisons as an insult becuase "Batman works!".