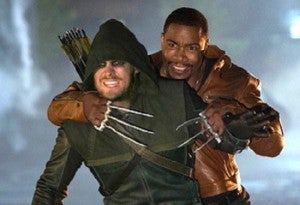 Michael Jai White, best known to comics fans as Spawn from the live-action movie based on Todd McFarlane's Image Comics antihero, will recur this season on Arrow as the DC Comics antihero Bronze Tiger, and TV Guide has the first photo of the character in action (seen at left). "Michael Jai White is playing Bronze Tiger and he is such a badass," said executive producer Marc Guggenheim. "His performance, our kick-ass stunt department, our incredibly talented costumer designer, and our very gifted props master...they've all combined their A-games to create a really great representation of this DC Comics character." In the comics, Bronze Tiger has often been part of the Suicide Squad, a team of supervillains coerced into fighting other supervillains and threats to national security. That group usually includes Deadshot, who's already been seen on the series, and is headed up by Amanda Waller, who was recently cast for Arrow.