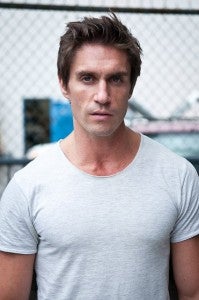 ...Wait, what? We're hearing it's not the same guy. Ah, well. Canadian actor Michael Rowe, star of indie films like Boltcutter and therefore best-known to audiences as "no, not the Mike Rowe from the truck commercials," has been cast as Deadshot in the upcoming CW series Arrow. We joke, of course, but ask Superman: The Movie director Richard Donner about the relative merits of casting unfamiliar faces in these iconic roles. Rowe's headshot certainly looks the part. "Deadshot doesn't speak much, so he has to have that physicality," executive producer Marc Guggenheim told Comic Book Movie. "And Michael certainly has that. He has that look." Producer Greg Berlanti, who has worked with Guggenheim in the past on a number of projects including Warner Brothers' Green Lantern movie, suggested that the character will likely not be one and done, hinting that a return later in the season is "very possible." Other DC Comics villains are expected to appear as well, with both Deathstroke and China White already announced. Deathstroke's mask has appeared in ads for the film and reportedly in the pilot, and was on display at San Diego Comic-Con International earlier this month, suggesting that we may see a more comics-friendly adaptation of some characters than Warner Television managed in Smallville, its fan-favorite and long-running Superman show in which nobody ever said "Superman" and there was a notorious rule of "no flights, no tights." As a result, the dozens of DC heroes and villains who appeared in the show had to be re-envisioned from the ground up, with mixed results. Arrow will premiere on The CW Wednesday, October 9th.

Arrow's Deadshot is a Dirty Job for Michael Rowe