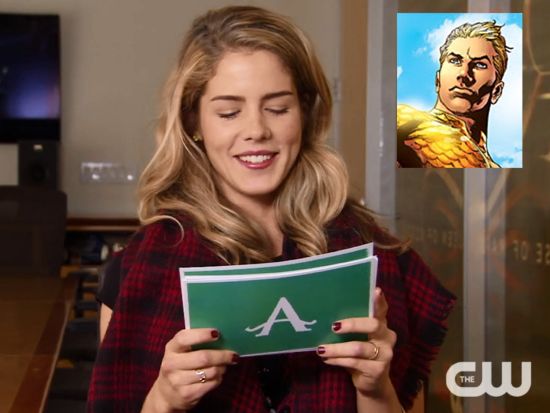 Arrow's Felicity Smoak might have flirted with Barry Allen in some recent episodes of the series, but it appears that Flash is not the superhero that Felicity has her eye on. In a Q&A session on Facebook, Emily Bett Rickards, who plays Felicity on Arrow, was asked who she would like to come on the show as a love interest for her character.

Emily wasted no time in naming her romantic superhero interest as none other than Aquaman. Of course, Aquaman's sort of taken. Even though they don't appear to be officially married in the new DC Universe, Aquaman has a longtime queen in Mera. Of course, Emily might not be aware of Aquaman's significant other. She also reveals in the interview that she just started reading DC Comics Green Arrow, so maybe she hasn't read Aquaman yet.

The Arrow Mid-Season Premiere for Season 2 is scheduled to air on Wednesday, January 15, 2014 at 8 PM ET on The CW.