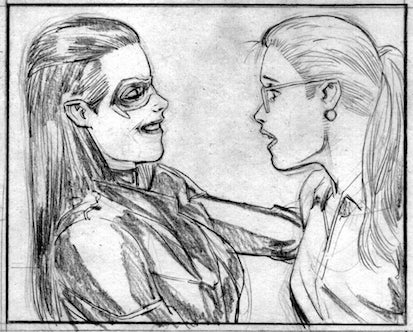 Arrow executive producer Marc Guggenheim informed fans today via Tumblr that Jessica de Gouw's Huntress will not return in the show's third season, but that she will have a story coming up in Arrow Season 2.5, the comic book set between last season and this one.

The comic has featured the Arrowverse version of Black Adam as well as a story featuring the Suicide Squad -- stories that would be difficult to tell given the production and budgetary constraints of the weekly TV series. It seems as though The Huntress' appearance here fulfills a similar role.

Here's how Guggenheim described it:

First, thanks to the many, many, many — MANY — people on Tumblr and Twitter who’ve reached out to ask me about if, when, and how the amazingly talented and simply amazing Jessica De Gouw would be returning to Arrow.

And thank you for being patient with me as I continued to promise this update.

I have good news, bad news, and wait-and-see news.

We’d been discussing an episode that would return Helena Bertinelli to Arrow for Season 3, but it didn’t come together for a variety of reasons having nothing to do with Jessica or her willingness to return.  As most of you know, despite doing 23 episodes a season — god help me — we still somehow manage to run out of room to tell certain stories (e.g., Felicity’s parents).  Unfortunately, Helena’s episode in Season 3 was one of those casualties of our lack of real estate.  We value Jessica and the character she created too much to waste both of them on a story we can’t give proper attention to.

Now for the good news…

Tomorrow, Helena/The Huntress will make her return to Arrow in comics form as part of our ongoing Season 2.5 series.  Unlike her previous appearance in 2.5, this time the Huntress’ return is not a hoax, not a dream, and not a hallucination.

As for the wait-and-see news…

Arrow has officially been picked up for a fourth season and we’ve still got a kick-ass idea for a Helena story.

Of course, last year's Huntress appearance was titled "Birds of Prey," in which she ran afoul of both Felicity and Sara Lance, the first Canary. That Canary, Huntress and a bespectacled tech genius named Oracle are the Birds of Prey in the comics was not lost on fans, although recent reports that Barbara Gordon/Oracle will be a member of the cast on TNT's Titans suggests it's probably unlikely Felicity will officially get that title.

The issue in question -- Arrow Season 2.5, Chapter 13 -- will be available on Monday and can be preordered on ComiXology. It should be collected in print in Green Arrow Season 2.5 #7, due in stores in April.

Arrow's Huntress Cut From Season Three, But Will Appear With Felicity in Season 2.5 Comic

James Bond: How to Watch Nearly Every 007 Movie for Free

Rocket League Season 2 Update Has a Surprise for Some Players