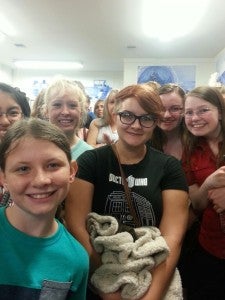 People began lining up around 3 pm on July 22nd in front of Once Upon a Time, a 47 year old independent bookstore in Montrose California. They lined up so that four hours later, they could hear John and Carole Barrowman speak before getting books signed by the siblings.

Ignoring the hot sun, total strangers waited out on the sidewalk, complimenting each other’s Doctor Who t-shirts, discussing who the next Doctor should be, quoting favorite episodes, and reading newly purchased copies of John and Carole’s fantasy novels, Hollow Earth and Bone Quill.

A little after seven, everyone in the very long line was crammed into the bookstore, and John and Carole made their entrance. Despite having just been at Comic-con, the Barrowman siblings were full of energy as they started to talk.

It began with Carole explaining that she and John have spent so much time together lately promoting the books that she was now able to sense what he is thinking (much like their book’s telepathically connected twins Em and Matt) and she knew he was planning on throwing her into a pool of water in San Diego. He finished the story by explaining that he instead dowsed her with a bottle of water.

And the playful banter and teasing continued for the rest of their talk. They told stories of games and teasing on the road, such as who could be the first to trick kids into saying pee and pooh when they visited schools. At one point, John explained to some children in the front that vodka is a drink like water that Mommies and Daddies (and gay Uncles) drink once the kids are in bed. 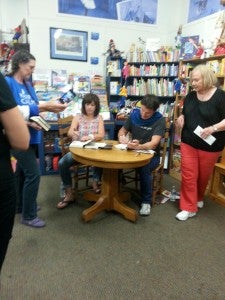 Eventually, Carole got them onto the topic of Hollow Earth. The idea came to them when they were discussing super powers with each other, and eventually they began to wonder about how neat it would be if your imagination was your super power. They also discussed how the first character they created was Zach, the Deaf friend of protagonists Em and Matt, and how they wanted to be the first ones to write a Deaf character without writing in the first person. Finally, they opened the floor for two questions, and I managed to snag the first one.

How do you manage to write these books with your schedules? Carole, I was raised by a college professor, so I know what your life is like. And John, you’re filming, and flying around the world, and running off to get married. Congratulations, by the way.

(At that point, everything stopped so the audience could cheer John for his marriage to longtime partner Scott Gill and so John could give DOMA a big rude raspberry.)

Carole answered first, saying that she and John both have very understanding partners (John quickly replaced the word ‘partners’ with ‘husbands’) who they pretty much ignore. She then explained that before her kids grew up, she had no office and used to get up very early in the morning and write at a desk in her walk-in closet. She actually planned on working on some of the third book in the series immediately after the signing. Then she said “It sounds facetious, but if you are passionate enough about something, you’ll find the time.”

John agreed, than explained that on his end, he has people who schedule his entire life, and he literally does not know what he is doing any given day until very soon before. For example, he knows he is gonna be on a plane Thursday and needs to pack beforehand, but unless he has lines to memorize, he focuses each day only on that day’s activities.

After questions, they each reach a chapter from Bone Quill, reverting to their natural Scottish accents to do so. After that, everyone was ushered outside and had to line up in the order they purchased their books in (each ticket given with the sales had a number on it). People were allowed back into the store a few at a time, where John and Carole signed their books and had quick conversations with everyone.

They also agreed to answer some questions for comicbook.com via e-mail, so keep an eye out for that, coming as soon as we can arrange it!