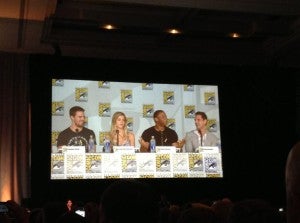 John Diggle, a character created for The CW's hit TV series Arrow and played by actor David Ramsey on the series, will become a part of DC Comics's Green Arrow with issue #25, which ships in November. The issue, which ties in with Batman: The Zero Year, will see a story set in the past, during which Green Arrow takes on Killer Moth in Gotham City. What happens to Diggle so that he doesn't appear again between the Zero Year and the modern day is unclear. The news was announced at a panel at Fan Expo in Toronto today and worked its way around social media for a while before we were able to find a tweet from the Arrow writers' room that confirmed it wasn't just speculation.