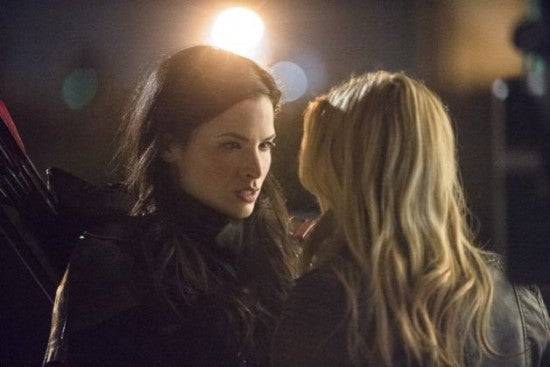 Warning: Spoilers ahead for tonight's episode of Arrow, titled "Heir to the Demon."

During Monday's screening and Q&A sit-down between Arrow producers and reporters in Burbank, one of the pieces of conversation we weren't immediately able to share with our readers was discussion about the complicated relationship at the heart of tonight's episode of Arrow.

Now that it's aired on the East Coast, we're sharing a bit more insight into the romance between Nyssa Raatko, the daughter of Ra's al Ghul, and Sara Lance, the Black Canary.

Starting, interestingly, with the revelation that when Nyssa was being cast, they used a false name for the character--and a false sexual orientation, suggesting that perhaps her interest was in Oliver Queen instead.

Here's the trimmed section of our earlier Q&A that pertained to the pair's relationship:

Katrina Law: I was surprised that I was going to be a lesbian.

When we did the chemistry read, I wasn't quite understanding why I was...

Guggenheim: We should actually clarify this for everyone.

Really for spoilers because the sides always make it out to the Internet, we made up fake sides for Nyssa because we didn't want to spoil the [identity]. So it was like, brand new character name, sort of that killer sort of thing but it was a scene between this character, I forget even what we called her, and Oliver. And then we narrowed it down to Katrina and one other actress and we brought them both back for chemistry reads with Caity Lotz and we said, "Oh by the way, she's gay and oh by the way, it's Nyssa al Ghul."

Kreisberg: About twelve seconds in, we went, "Oh, it's Katrina and Caity."

Kreisberg: And that's what we did with Emily and Grant. There were a couple of other actors who were in line for The Flash but it's to our cast's credit that they really understand that.

Some actors, I'm sure, would be like, "Well, that's a waste of my time," or "I've got better things to do" but whether it was Grant, Stephen, Caity Lotz--they've all come down. Stephen did it to help us find Caity Lotz and Caity Lotz returned the favor and helped us get Katrina on board and it really is important.

What made you decide to make the character gay, and to make Sara a bisexual?

Kreisberg: It was really more about Sara than anything else. We just--and by the way, we thought of this at the beginning of the season. If you watch 205, there's a reference to The Beloved and "You think that's gonna keep you safe," and we talked about--well does Ra's al Ghul have a son? And then we were like, could it be Talia? And we felt like Talia had just been done in the movies and one of our writers had brought up the idea of Nyssa. It just felt like something new and different and at the same time, we didn't do it to be salacious. It's a pretty chaste relationship from what you see onscreen. It just touched on a couple of interesting things--the idea that Sara found herself in this terrible world and found this one person who treated her with love and kindness. And then even the way it bounced back for Lance, that this sort of hardened, tough cop who's probably not the most progressive guy, that even he was like, "I'm just glad you had somebody who loved you and took care of you during those nightmare years." Those little moments just felt like they would be special and play for us.

Guggenheim: We were very anxious about, in the same episode, we revealed that Sara'd had this lesbian relationship, she also is sleeping with Oliver again and we really wanted to approach it, not be salacious and be sensitive and be realistic and actually, we specifically avoid using the term bisexual. We didn't want to label her at all. Let her be her own person and if the audience wants to label, fine, but we wanted to not make it like it's that specific. It is a very specific relationship to Sara and Nyssa and by the way, maybe Sara's had other female relationships in her past but we'll get to that in due course when it's right, if it's right. But we wanted to not just do something to shock.