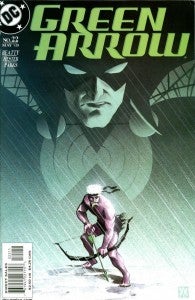 According to the folks over at TV Line, the identity of Oliver Queen's biggest adversary in the first season of the hit CW series Arrow will be DC Comics villain Count Vertigo, who will undergo a number of changes to bring him more in line with the feel of the show. The character, who will be introduced in early 2013 during the second half of the show's freshman season, will reportedly be renamed and recast as a drug dealer...whose product is called Vertigo. One has to wonder whether Miraclo can be far behind. "He will be truly scary and nightmarish," a source told the site, adding that Vertigo will be "Oliver's deadliest adversary to date." A world where Count Vertigo is a more substantial threat than Deathstroke? Hollywood really does change everything. Originally introduced as a villain in the late '70s, Vertigo has menaced any number of DC characters during his time as a villain but has spent quite a lot of time as part of the Suicide Squad with Arrow's villain from last week, Deadshot. Prior to the New 52 reboot, Vertigo had been involved at one point with Checkmate, a super-spy organization with ties to characters like Ted Kord/Blue Beetle, Maxwell Lord, Amanda Waller and Manhunter--all of whom have been rumored as potential DC Universe guests stars on Arrow. The sheer number of familiar faces from DC's past have somewhat obscured those early interviews, in which showrunners described Arrow as a kind of Jason Bourne/James Bond-style high-tech revenge/spy thriller with a little archery tossed in, but the involvement of Checkmate could re-establish that vision of the series quickly.