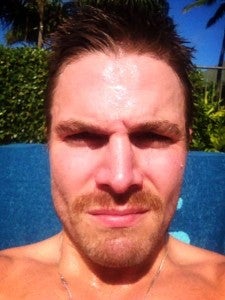 star Stephen Amell posted a new photo of  himself with a bit of a shaggier beard than usual, telling fans that he's celebrating the cancer awareness "Movember" movement in December to accommodate the show's filming schedule, because he looks too "creepy" when he's growing an unrestricted beard to appear on TV. "I never get the chance to celebrate Movember despite the fact that it's an excellent cause and F--k Cancer," Amell said, referencing an anti-cancer group with whom Amell is very active. "Great cause or no, I don't think the CW would appreciate a creepy Oliver Queen. So I'm having my own personal MoCember. Also, f--k cancer." Of course, the "creepy Oliver Queen" criticism is a bit ironic considering that any comic book fan will tell you that for most of his existence--and almost all of his best-loved stories--Ollie wore a Van Dyke beard. He added, for those concerned about his well-being while shirtless in beautiful weather in late December, "That's a droplet of ocean water running down my face. Not a single tear."