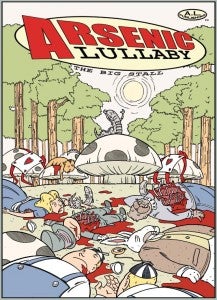 One of the most high-profile Kickstarter success stories in recent comics history is Douglas Paszkiewicz, whose long-running Arsenic Lullaby is, in his words, "one of the few independents who weathered the storm" of the last fifteen years in comics. We spoke with Douglas at San Diego Comic-Con International earlier this year about the forthcoming Arsenic Lullaby: The Big Stall, the book which just raised more than twice its hoped-for amount on Kickstarter and saw Paszkiewicz far outstrip his standard sales through Diamond Comics Distributors. Paszkiewicz wrote an open letter to comics creators and retailers detailing his experience, which you can read here. The money quote is this: "After seeing orders continue to slide through the normal distribution chain that puts publishers fate in the hands of store owners who often balk at anything without capes and tights, instead of relying on the curiosity of the readers, Arsenic Lullaby Publishing cancelled the orders and put all its chips on red. 'Red', being Kickstarter. In 28 days Arsenic Lullaby acquired over sixteen thousand dollars worth of orders. A total that equals about three orders through Diamond Comics distributors, after 60% is taken off the top to split with stores and the distributor itself. This is a torpedo across the hull of a system generally unfriendly to indy comics." The end result of the Kickstarter was not only a boon for Paskiewicz but also for his readers: The Big Stall will be the first-ever Arsenic Lullaby comic to be published in full color. You can check out Paskiewicz's Kickstarter trailer at the bottom of the story. What follows is the conversation we had with Paskiewicz at Comic-Con. Douglas, you've had a lot of content coming out in the last little while. Tell us about The Big Stall. The Big Stall is a smaller version of a book that's going to be coming out in late October. We put about thirty pages out of it ahead of time and got the Comic-Con exclusive logo on there. It's full of--I get a little more warped and strange every issue so this one's really out there. There's Baron von Donut, who's an alcoholic cereal mascot. There's a story in here about how he ruins Christmas. I know it's not Christmastime but isn't it always Christmas in our hearts? ...No, it's not. But when you have to fill pages and you have a Christmas story on your desk, that's Christmastime. Do you know when it's Christmastime? When it's done--when my Christmas story is done, that's Christmastime. Merry Christmas! Eight pages out the door, get it out of here. Why don't you give the back of the cereal box pitch for what Arsenic Lullaby is? You'd think after fourteen years I could sum it up -- but it's just a collection of really dark, despicable stories. The best quote I heard was that it's like The Far Side mixed with a John Carpenter movie. Really strange, kind of horrifying and if you've got a despicable sense of humor or you're just tired of the same thing -- if you like The Far Side but you've got a strong stomach, this is the book for you. I'll give you a little example. Everyone reading this probably knows who Cthulu is, and everybody's got their own take on Cthulu. So in this story we've got Cthulu going to a newspaper, complaining that he's not getting enough press. He's sort of whining to the editor, like "What have I got to do? I've been killing hobos at midnight for like a week and a half; I'm not getting any press here. Then he starts complaining that his followers aren't as cool as the Satan-worshiping followers. He says, "All the cool joiner types join the KKK or the skinheads or the Satan worshipers. He's obscure so all he gets are dysfunctional English Lit students and stuff like that, you know? They can't handle anybody more than a hobo. So you start killing hobos. And the newspaper editor sort of has pity on him and tries to help him come up with some better ideas, and it just kind of turns into a mess with Cthulu just crying on the desk. The larger version will have more where Cthulu kind of turns the tables on the newspaper guy and it turns out he's a bit more sinister than he first appeared. If any of that made sense to you, you'll like the whole book. That's kind of what we do is that I take really strange concepts, shove a little bit of reality in there to make it even more weird and then just follow it to its absurd end.