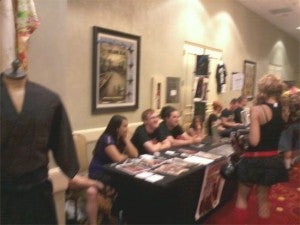 As a continuing series of articles on Comicbook.com, we are reporting on various comic book conventions from across the nation. The Atlanta Comic Convention is a great one day show in Atlanta, Georgia. It is run by veteran promoter Wes Tillander.

This one day event happens three times a year and has been going on for over a decade. The most recent Atlanta Comic Convention occurred on Sunday, July 10, 2011 from 11 AM to 5 PM, and around 500 people attended for the day. Guests included actors from The Walking Dead, comic artist and writers like Bobby Nash (Lance Starr) and Sean Taylor (House of Horrors). There were also special appearances by wrestler Raven and creator Bob Burden (Flaming Carrot).

Dealers were a plenty with a great selection of golden age and silver age comics, Star Wars toys, trading cards, anime and more. Sales for the show were good, and highlights included Amazing Spiderman #6 and #8 for $350, high grade Batman 237 for $125, Tomb of Dracula #1 for $90, and a last minute sale of nineteen long boxes of comics for $100. Toy sales include an AFA vintage Spider-Man 12 inch Mego sold for $1000.

The Atlanta Comic Convention charged a $5 admission with free posters and TPB until they ran out. The next show date is not up yet but you can find out more at www.atlantacomicconvention.com. Next, I'll be at the Derby City Comic-Con in Louisville with guest Tony Moore and lots of great dealers and deals. See ya on the road Marc “ComicCity” Ballard, comic city conventions, www.comiccitytn.com.