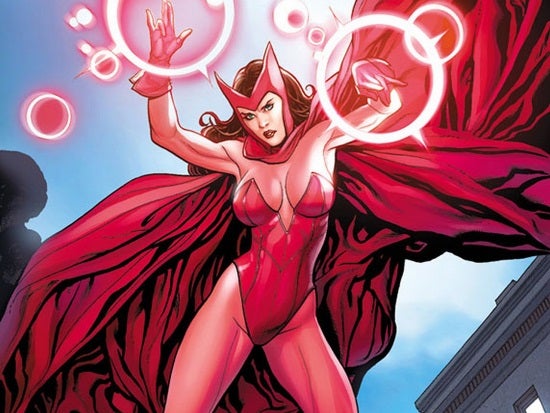 In the latest issue of Total Film (via SuperheroMovieNews), actress Elizabeth Olsen was asked about her look for her role as the Scarlet Witch in Avengers: Age of Ultron

When asked if she would be wearing Wanda Maximoff’s most iconic outfit, which can pretty accurately be described as bright red lingerie, Olsen had this to say:

"We’ve done some costume stuff, yeah! My favourite piece is my secrecy cloak that prevents anyone from seeing what I’m wearing. There’s a hood, and a robe – it protects the image!

I don’t think Joss ever would have hired me, honestly, if he wanted me to wear those outfits; I am not a professional athlete and nor am I a model. Wearing those costumes wouldn’t be fun for anyone who wasn’t those things. He already had a different idea. It respects and involves the comic-book character but it’s different, more rooted. It’s for someone today."

"Well, if someone walked around wearing what she wore in the comics, people would stop and say, ‘What the hell… she thinks she’s a superhero!’"

So it sounds like the Scarlet Witch will be getting a redesign unique for the Marvel Cinematic Universe that’s a little less sultry than her comic book costume.

The Falcon And The Winter Soldier Episode 4 Ending Is A Twisted Version Of This Captain America: Civil War Moment

The Falcon and the Winter Soldier: Fans Are Freaking Out Over John Walker’s Shocking Use of Cap’s Shield