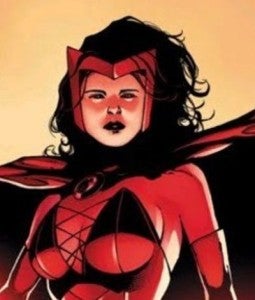 Not much is known officially about the Avengers sequel other that there will be at least two new teams members and Ultron will be the main villain. Scarlet Witch and Quicksilver will be the two new members already confirmed to be joining the Avengers team for Avengers: Age Of Ultron.

When asked about the headpiece, Joss Whedon said, "No. She might wear a headband or something that might echo it. The guys at Marvel, the conceptual artists, are phenomenal, and they are so good at taking the essence of what works and interpreting it for the actual human body, and when they paint something you can not only tell how it’s gonna work on a person, you can even tell what fabric it’ll be. They are very specific, very talented. So I’m excited to see the designs."

Whedon added, "Obviously we want to echo the look that people know, but there’s the classic look and the Ultimates look, but you have to do it in a way that will work. But it can’t be too old school… she can’t wear a leotard."

Of course, leotards have been out of vogue in comic book movies for awhile now, so that's not a big surprise. However, we're hoping that  they figure out a way to make the headband look at least somewhat like Scarlet Witch's traditional headpiece.

Avengers Age Of Ultron: Scarlet Witch To Trade In Her Headpiece For A Headband