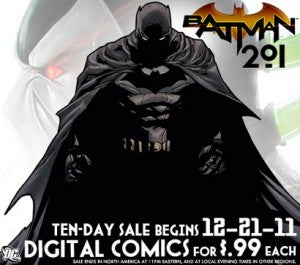 Want to get primed for the upcoming Avengers Vs. X-Men series coming out from Marvel soon, but don't have a ton of cash? What about newer readers who might not remember stories like Knightfall all that well and need some context for why Bane is a better choice than Riddler for the upcoming film The Dark Knight Rises? Well, ComiXology has you covered this holiday season. While Oni Press, Image Comics, Boom! Studios, Dynamite Entertainment and IDW are all taking part in ComiXology's holiday sale, which features hundreds of comics for 99 cents between now and December 30, the headline everywhere is that the "big two" have some of their best and brightest properties available in large numbers for under a buck. DC is having a big sale on a number of notable Batman stories, including the Bane-centric Knightfall and fan-favorite stories like Year One and 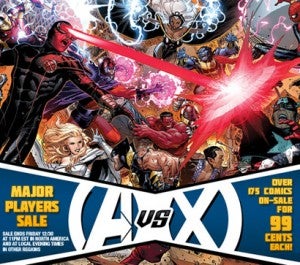 . Each issue is 99 cents. All in, there are over 200 comics featuring the Caped Crusader on sale, ranging from The Dark Knight Returns to relatively current Batwoman and Batman Beyond stories. At the same time, Marvel is offering a "major players" sale on their Avengers and X-Men titles, allowing readers to get caught up not just with the main Avengers and X-Men comics, but also with titles like Captain America, Wolverine and Spider-Man. Offering runs of about 25 issues each, Marvel describes the sale as a "can't-miss" event and is promoting it aggressively on the Marvel app as well as social media, where they're still using the #AvX hashtag for news and announcements relating to the series. Check out ComiXology's sale here and be on the lookout soon for a list of the top 10 digital comics to pick up this holiday season!