Both Marvel and DC spent much of the week hyping their upcoming projects and revealing covers to upcoming stories, but we weren't able to give each new batch of images the coverage it may have deserved thanks to time constraints and conflicts. With the end of the week, then, here's a look at the Marvel and DC titles we didn't have a chance to show you yet. Click on the thumbnail to see a full-sized version of the covers.

SECRET AVENGERS #27 Written by RICK REMENDER Pencils by RENATO GUEDES Cover by ALAN DAVIS ON SALE THIS MAY!

WOLVERINE & THE X-MEN #10 Written by JASON AARON Pencils & Cover by CHRIS BACHALO ON SALE THIS MAY!

#4 Written by JONATHAN HICKMAN Pencils by JOHN ROMITA JR. Colors by LAURA MARTIN Cover by JIM CHEUNG ON SALE THIS MAY!

X-MEN LEGACY #266 Written by CHRISTOS GAGE Pencils by RAFA SANDOVAL Cover by MARK BROOKS ON SALE THIS MAY!

UNCANNY X-MEN #12 Written by KIERON GILLEN Pencils & Cover by GREG LAND ON SALE THIS MAY!

AVENGERS ACADEMY #29 & 30 Written by CHRISTOS GAGE Pencils by TOM GRUMMETT Covers by GIUSEPPE CAMUNCOLI ON SALE THIS MAY!

#26 Written by BRIAN MICHAEL BENDIS Pencils & Cover by WALTER SIMONSON ON SALE THIS MAY!

Back in December, we announced SUPERMAN FAMILY ADVENTURES, a new ongoing monthly series for readers of all ages by the Eisner Award-winning creative team of TINY TITANS, Art Baltazar and Franco. Today, take an exclusive first look at the cover for the series' premiere issue, in stores on May 30th. But wait, there's more! We reached out to Art and Franco to exclusively give you fine readers of THE SOURCE a few teases about what to expect in SUPERMAN FAMILY ADVENTURES.

The first arc of Smallville Season 11 is scheduled to include 12 chapters, which will be available via the DC Comics app on Apple, Android and Windows mobile devices, as well as online at read.dccomics.com. The first print edition goes on sale May 16 and will collect the opening four chapters, along with an episode guide to the TV show. The digital covers (including the one pictured above) are the work of artist Cat Staggs, while Gary Frank will handle the print covers. Pere Pérez, who worked with Miller on the Batgirl comic, will handle the interior art. Here's an exclusive look at the first print edition cover, by artist Gary Frank. 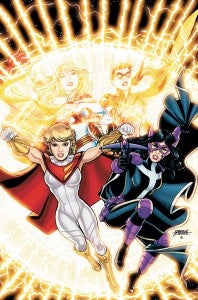 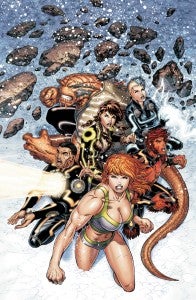 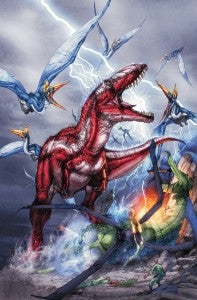 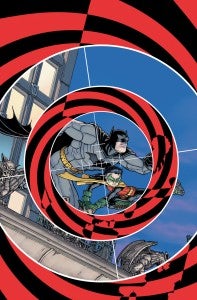