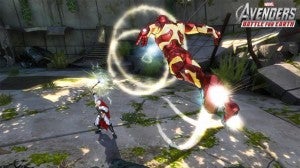 Marvel and Ubisoft released a minute and 20 second trailer at the Electronic Entertainment Expo today, and MTV News has the footage on their site--which, of course, means that we, too have it below. The alien invasion title and plotline may suggest a connection the mega-hit cinematic version of The Avengers, but the presence of characters like Wolverine and Venom--the first two characters seen in today's story trailer--says very definitively that the game is taking some cues from the Marvel Comics Universe, as opposed to the cinematic universe where Marvel doesn't own the rights to either of those characters. Except, of course, that Venom appears in his classic appearance as a Spider-Man villain, not as the current super-soldier iteration of the character. Hawkeye, as well, appears in his classic purple-and-blue comic book costume rather than the more recent versions we've seen onscreen--but in what appears to be one last concession to the film's audience, the Avengers' lineup as seen in the closing moments of the trailer is the one fans are familiar with from the movies. Like DC's recent trailer for Injustice: Gods Among Us, this one seems to focus on setting up two things: the basic premise for the world it's set in, and a few cool shots of each key character. And like DC's ad, some of the ways characters use their powers are fantastic, seemingly the kind of stuff you've only ever seen in the comics before. The game will be available on Wii U and XBox Kinect, and will reportedly hit consoles in the fall, according to MTV Splash Page.

John Cena Was a Proposed Member of WWE's Evolution Stable