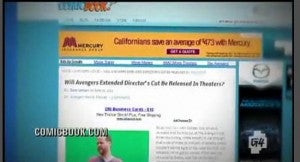 The debate rages on as to whether Disney will or should release an extended director’s cut of The Avengers in theaters. Since the initial idea was published on Comicbook.com, there have been a number of news sites to pick up on the story. We took the question to Marvel Studios PR, and their official response was “Marvel has an overall policy not to comment or confirm rumor or speculation so unfortunately there are no answers I can give to you.”

Of the top ten movies on the all time U.S. box office grosses list, six of them have been re-released: Avatar, Titanic, Star Wars: Episode 1 – The Phantom Menace, Star Wars, E.T., and The Lion King. Statistically speaking, the odds are in favor of The Avengers being re-released. However, there is still a lot of question as to if Disney will do it or not.

Some sites have had Hollywood sources confirm that it is being considered, other sites insist that it will never happen, and still other sites think it may happen but only because everyone is talking about it now. Because we would really like to see it happen, we’ve compiled a list of our top five reasons why we think an extended director’s cut of The Avengers is a good idea.

It’s Joss Whedon’s original version. – On his first cut for The Avengers, Joss Whedon had a three hour long movie. Both he and Disney rightly realized it would be a mistake to release a three hour movie, and they cut it down to just under two and a half hours. Whedon went on record saying he was happy with the cut and felt it was the final director’s cut. Both he and Disney were right, and The Avengers was a huge success at the box office. The shorter version was the right version to initially release to the general public. A longer movie might have been too much for the casual moviegoer. But we’re not talking about an original release any more. We’re talking about a re-release to provide an extended cut for the super fan who wants to see every bit of The Avengers that he or she can. Some people are hung up on the use of the words “director’s cut” based on previous comments by Whedon, but as one commenter on Whedonesque.com suggested, it could just be called an “extended cut” to avoid offending anyone. No one’s forcing anyone to go see the three hour version, but it’s just an extra treat for those that want to see The Avengers again. In addition to the super fans, we've also heard a number of general moviegoers say The Avengers was one of the rare movies that left them wanting more. We bet an extended version would be just the ticket to get a lot of people back in the theaters for a second viewing.

Records are made to be broken. – Some people argue that re-releasing The Avengers to break the all-time U.S. box office record would be cheating. To this we point out that both of the two movies ahead of The Avengers on the chart did it. In fact, at it’s current pace, The Avengers will likely pass the original release of Titanic, but it will probably not pass the overall total which includes the re-release of Titanic in 3D. What’s unfair is if The Avengers doesn’t re-release and gets stuck in third place behind Titanic. Does it mean anything to have the record? Yes, if it didn’t, then people wouldn’t keep lists. We would love to see a comic book movie have the title of the all time box office champion at the U.S. box office.

Whedon deserves the record. – Personally, Whedon might not care about the record. It’s probably not a record that he went into The Avengers even thinking about, but it’s the record he deserves. Whedon delivered a movie for the ages. He took a diverse set of characters and pulled them together in an entertaining movie that not only appealed to comic book fans but also the general public. It’s not an easy task to have a movie with as many moving parts as The Avengers and pull it into a coherent story that makes sense and entertains. Whedon accomplished something very few directors in history have accomplished. We’d love to see Whedon have the title of the director of the biggest blockbuster of all time at the U.S. box office, because we think he deserves it.

It would stimulate the economy. – Some people would argue that re-releasing The Avengers would be all about greed, that the movie has already made more than enough money. However, other than The Avengers, Hollywood has been struggling of late. Several recent big budget movies have failed big time, including Disney’s own John Carter. At least one big budget movie planned for this summer, GI Joe: Retaliation, has already been pushed back to a later release date. The Amazing Spider-Man and The Dark Knight Rises will likely rule July, but by August the box office could be hurting again. After The Amazing Spider-Man, most of the big budget action movies being released later in the summer have opted to forego 3D, which means that come August many theaters might be thrilled to for the opportunity to sell some more 3D movie tickets with an Avengers extended cut. Plus, putting the Avengers back in theaters right as kids go back to school would be a good push to help sell all those Avengers backpacks, lunchboxes, and notebooks that are sure to be lining store shelves.

So what do you think? Should an extended director’s cut of The Avengers be released. If you agree, then be sure to sign our petition.