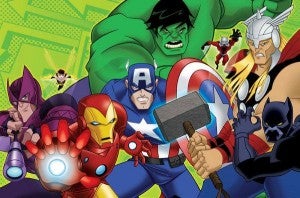 A trailer for the second season of Avengers: Earth's Mightiest Heroes, set to premiere next weekend on Disney XD, has been released by Marvel Comics.

While the video focuses on Captain America, Hulk, Thor and Iron Man (the major male leads featured in this summer's live-action feature film version of the team), the ad doesn't scrimp on Marvel characters, giving fans a look at dozens of Marvel heroes and villains, including Black Panther, Red Hulk and a version of Captain Marvel which appears to be a kind of halfway point between what Ms. Marvel currently looks like and what she'll look like in her new series this summer when she officially changes names.

Avengers: Earth's Mightiest Heroes will premiere on April 1 as part of a Marvel Universe block of programming on Disney XD, along with the premiere of Ultimate Spider-Man.