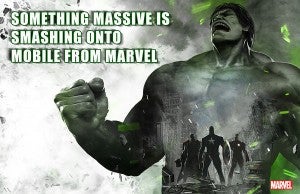 While not officially announcing a game, the location of the teaser image along with accompanying text that "The following link is the first glimpse into what's in store for Marvel gaming fans" leaves little to the imagination.

The image may or may not be involved with the alread-announced Marvel: War of Heroes game, but if not, I for one hope that it'll just be a "Hulk smashes stuff" game where you smack away randomly at your touch screen and Hulk obliterates things. That's my speed.