"What summer movie are you most looking forward to?" 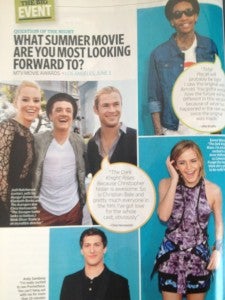 That's the question put to a number of celebrities, and a pair of the highest-grossing box office stars in recent memory have kind words for Christopher Nolan and The Dark Knight Rises.

Emma Watson, star of the Harry Potter franchise, told the magazine that she was looking forward to seeing the film, because, "I'm actually excited to see Anne Hathaway as Catwoman."

"Forget the boys," Watson added, "I think she's going to be really hot."

One of the summer's biggest boys, meanwhile--both figuratively and literally--can't wait to see Batman swing back into action, either. Chris Hemsworth, star of The Avengers and Snow White and the Huntsman, heaped praise on the Batman franchise, answering, "The Dark Knight Rises. Because Christopher Nolan is awesome. So is Christian Bale and pretty much everyone in the film. I've got love for the whole cast, obviously."

Other movies mentioned were Ridley Scott's Prometheus, out this week (look for the ComicBook.com review of the film early tomorrow), Oliver Stone's Savages and the upcoming remake of Total Recall starring Colin Farrell.