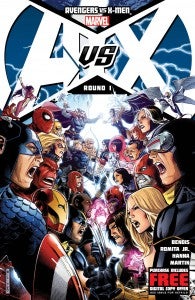 Marvel's epic, six-month event began at midnight with the release of Avengers vs. X-Men #1 and Avengers vs. X-Men #1: Infinite. The latter, designed to be viewed digitally and released only as such, will be reviewed tomorrow morning but a midnight trip to the ComiXology store bears a seat-of-our-pants review of Avengers Vs. X-Men #1, which Marvel claims has already sold 300,000 copies in the direct market and will defeat all comers as the top-selling superhero comic of the year. It's certainly not a book that will win over the many readers critical of Bendis' decompressed storytelling or his tendency for characters to stand around talking. If The Avengers movie has this many static two-shots and this much dialogue, Whedon will be strung up in the town square--possibly at Disney's Main Street--for slowing down what should be an action movie. That said, the whole premise of this event is to turn the Marvel Universe into a big punch-'em-up action movie for half a year and inasmuch as that's kind of appealing to the lowest common denominator, I would argue that having a first issue that's a lot of politics may not be all bad. That said, a lot of the dialogue is ham-fisted and a lot of the characters' motivations or actions make little sense. Cyclops and Hope's dynamic is radically different from last week's #0 to this week's issue, with Hope wandering through this issue somewhat shell-shocked after giving her trainer a bit of comeuppance last week. Cyclops, meanwhile, seems to be unraveling. Like Rick Grimes at the end of the season finale of The Walking Dead, he more or less tells the other mutants that if they aren't with him, they're against him and that Hope's destiny is no longer her own to control. Apparently, "The Avengers just don't understand these complex issues" has been replaced in Cyke's mind by "Only I understand these complex issues." Cyclops' "Where were you when we needed you?" to Captain America is bound to become a catalyzing question for the series and will surely spark a lot of fan discussion--but it seems to me just another glib, sanctimonious jab not entirely unlike "the last time you inspired anyone was when you were dead," or any of the other half-dozen we've seen since then. I'm glad Cap didn't take the bait and let it sway him, becuase maybe we can symbolically end the Civil War/Grounded era of storytelling simply by virtue of someone ignoring those moronic challenges to their morality. 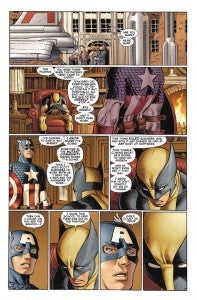 It's that instability and lack of perspective that makes Cyclops an easy target--although if past Marvel events tell us anything it's that the guy who's clearly wrong will end up right by the midpoint. Or at least that's what the writers will tell us. They do a fine job of explaining (without necessarily tackling the question head-on just yet) why Wolverine will end up siding with the Avengers. It's a vote of no confidence in Cyclops specifically and his agenda as it pertains to the Phoenix Force, more than anything else. That, of course, is the kind of thing that could flip completely by the time the story is done being told. To use the Civil War parallel, expect him to be the Spider-Man of the story. He's not the only character who comes off a little self-involved, either: Our first look at Tony Stark is as a petty and childish man, whose "father figure," Captain America, is too amused by the sheer silliness of him to rein him in. it doesn't bode well for either the Avengers' characterization, or for their chances of winning any sustained "war." Romita's art--which I know is sacred to many fans--just isn't there for this one. I often find myself somewhat put off by his Silver Age style being shoehorned into depicting more contemporary heroes and using modern coloring methods, and his work is best suited, in my opinion, to doing solo books that focus mostly on characters like Captain America and Thor, whose looks are largely the same as they were back when his father was drawing them. This book, then, isn't a perfect fit for him and it shows. The way he draws Iron Man's nanotechnology warping around him looks odd, and even his Wolverine looks silly and soulless to me. 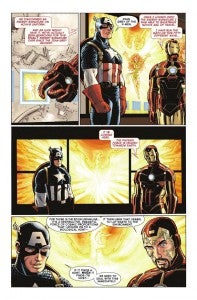 All of that said, there's a particular two-page splash, where the Marvel AR app allows readers to flash back through the production process of the piece. It looks strikingly better in color, where Romita's lines seem more crisp and sure of themself. There was also a tweak in the visual storytelling aspect, which is not explained (there are two different compositions for the page shown in black-and-white), but it seems to me that they used the weaker visual in the final product. One has to wonder whether that was Romita, Bendis or editorial's decision but it doesn't serve the piece and seeing his first go gives the impression that his instincts were right. It's the AR App that made this a must-buy for me, cynical as I am about the whole Avengers Vs. X-Men idea. New digital territory is always something I'm eager to explore, and that was the promise of the app and this issue. For the most part, fans who watched early preview videos or saw coverage from SXsW have seen what the app has to offer in this issue--there's the commentary from Alonso at the start as well as one from Brian Michael Bendis later on, a few pages where you can see the art go from pencils to colors and the Iron Man animation on the inner cover. It's not something that's used every page (and it's debatable whether it should be, although I'd like them to set a standard of using it quite a lot if they're billing it as the future). The introduction by Axel Alonso is less informative than it is a chance to tell fans they're part of something special, reminding them that this is the first chance to check out an AR title. Hopefully, the feature will be used a little more cleverly in the future (Bendis' brief interview is something more akin to what I was hoping for). 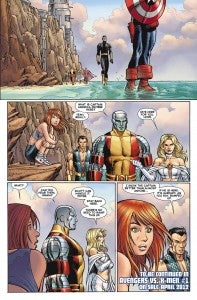 For those of us not following the X-titles regularly, it's nice to have a little bio of Hope Summers pop up at a key point in the story, but it would be even nicer to have a few more of those to explain things like why Magneto is hanging out with the team. Yes, yes, I know that it's been years that he's been in and out of the mansion but if this series is meant to appeal to people who are not the wednesday regulars, it should be considered that almost everyone knows him exclusively as the bad guy. AR app is oddly buggy at times, too. This may be a result of my buying digitally, but the "Iron man taking off" schtick really didn't work because I saw only his feet and had to point my camera up (and potentially away from the page, breaking the connection) in order to see the character proper. It's enough to make one wonder whether a cell phone camera really is the best way to integrate print and digital features, but it's nice that someone is at least trying. So, ultimately, this comic is what it is--it' a guaranteed smash by virtue of not just its content but its importance to Marvel's overall business plan and their approach to digital. That doesn't make it a good comic, and lukewarm writing and art do very little to make it one either, but that doesn't necessarily mean in this case that it isn't a worthwhile purchase.