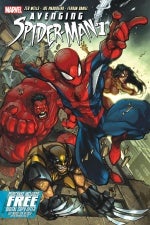 If you were at all even aware of comic books in the 1990s, then you surely remember the saturation of a certain Marvel character on the market: Spider-Man.  While Wolverine certainly deserves to be here too, Spider-Man holds a special place in the public consciousness.  Overall he's likable, full of wit and quips, he has a complex and relatable personal life, and his origin story can speak to lots of people who have ever had to face adversity at a young age.  Even though titles such as Web of Spider-Man, Spider-Man, Spider-Man Unlimited and Spectacular Spider-Man eventually faded away, either in the 90s or the 2000s, the character is still around, with Amazing Spider-Man being the longest running and most known of these solo efforts.  I'll admit, I've never been that big of a Spidey fan.  I like some of his stories and his villains, and I recognize his place in Marvel's important heroes, but I don't tend to go for his books.  I don't mind him on teams, however, and I love him in the Avengers. When I heard that he was getting another book in Marvel, this time in the form of Avenging Spider-Man, I was a bit skeptical until I heard the concept, which would be Spider-Man, still in his own adventures but with appearances from various heroes and Avengers associates.  I decided to pick this one up, and I'm glad I did.  The first issue of Avenging Spider-Man had me interested from start to finish, in no small part due to the fantastic art from Joe Madureira and the quick and clever writing from Zeb Wells.  The story opens with Spider-Man and the Avengers stopping some generic giant robot and some A.I.M. henchman, pretty routine, but we do get to see the point of view of Spider-Man, something we don't always see from him in more of the "team" books that he's in.  The story unfolds as he and the Red Hulk are traveling back to New York City proper, mainly so Spidey can catch a ride home, and as Hulk returns Spider-Man to New York, they encounter the New York City Marathon overrun with the Mole Man's moloids. Madureira's art is great at capturing the panic and sense of action that goes on in this scene, as well as the previous scene involving the battle with the robot.  Characters such as Spider-Woman, Captain America and Wolverine all look great under the pencil and pen of the artist, and it's a fresh look for the wall crawler and his environment.  The story wraps with a visit to the Mole Man and his subterranean land, only to find that he is no longer in control.  Wells delivers some clever dialogue between Hulk and Spidey, and an ok story overall in setting up the next issue.  My one quibble with this otherwise fine issue is how brief this intro to the new story is, as just when we had arrived at a point where the story could go further, the Mole Man imprisoned in his own land, it quickly ended.  Despite that, this is a great new series for those who love Spidey and those, like me, who were not fans overall.  I must say that I will definitely check out the second issue.

Avenging Spider-Man a Fresh Take on a Long Established Franchise