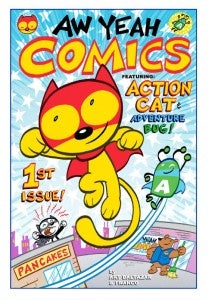 Art Baltazar and Franco Aureliani, the fan-favorite creators behind Tiny Titans and Superman Family Adventures for DC's all-ages imprint, announced yesterday that they had launched Aw Yeah Comics, their own all-ages publishing venture that will feature their original characters Action Cat and Adventure Bug, along with a cast of comical characters, in stories that, let's face it, will be awesome because of where they're coming from.

The series will feature a revolving roster of creative talents, from newcomers to veterans, with Baltazar and Franco (that's what he's credited to be called, not a confusion on our part as to his last name) serving as the publishers, lynchpins of the series--and distributors, since so far there's no announcement in place for Diamond Comics Distributors or any digital service to get their hands on Aw Yeah Comics. Instead, it will be sold at conventions, via mail order and at the Aw Yeah Comics store in Skokie, Illinois.

(For the uninitiated such as myself, it should be noted that Action Cat and Adventure Bug are apparently the store's mascots, something that true devotees will know already.) 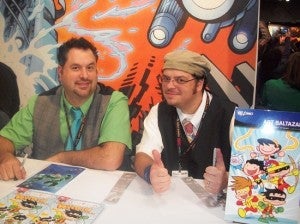 The creators describe the series as "All ages, awesome, and a different experience every month," and tease fans on their Facebook page to "wait until you see who we have lined up."

With a work history that has run the gamut from self-publishing to working in Disney Magazine, Baltazar and Franco seem to have settled into a rhythm as staples of DC's all-ages lineup, garnering a larger following than ever with the success of projects like Tiny Titans and winning an Eisner Award for the title last year. While it's not specifically addressed in their initial comments, it seems extremely unlikely that this project will take them away from Superman Family Adventures.

The first issue of Aw Yeah Comics will be available in September. We'll keep our ears to the ground for any inkling of a digital release at Comic-Con.