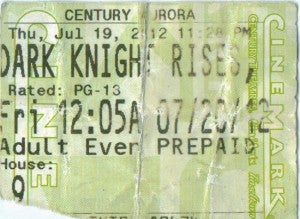 Courtesy the Suicide Girls Blog, their contributor A.J. Focht provides the second in a three-part series he's writing on the aftermath of the Aurora Theater shootings in Colorado. Focht and seven of his friends were present in Theater 9 when a screening of The Dark Knight Rises erupted into violence, and has a lot to say about the way that the media, politicians and the Internet have reacted to the news.

In my previous article, I discussed the way in which the mass media has mishandled the Aurora theater shootings. While some in the media approached the story with respect, the majority of them showed little consideration for the victims involved. But it’s not just the media that has been careless in the aftermath of the massacre. Many politicians have used this event as a spring board for their campaigns, while already failing to live up to their promises to the victims.

It’s been a week since I sat down in Theater 9, unaware of the hell that awaited me. I remember the high pitched screech, like a bottle rocket, as the coward tossed the gas grenades into a theater full of unsuspecting moviegoers. I can hear sounds of gunfire and see the bright flashes coming from the corner of the theater in the back of my mind. The screams of the victims in the theater haunt me at night. The vivid memories of wandering shocked through a crowd of people covered in blood, with no way of knowing whose blood it was, will stay with me forever.

I am just one of hundreds of movie patrons that share this horrific experience. Despite these mental scars, I am eternally thankful I have no physical wounds to match. Seventy people in the theater were not as lucky, and twelve of them paid with their lives.

The death toll could have been much higher if it had not been for the amazing first responders. The first police officers arrived on scene within minutes of the shooting. Several officers took it upon themselves to deliver victims to local hospitals in person, instead of waiting for the ambulances. Their quick action likely saved several lives. While the police, dispatchers, medics, firefighters, and ER doctors all did an amazing job that night, I feel they have already received a lot of praise. I therefore want to personally thank the unmentioned heroes of that evening; the victims’ advocates and local RTD bus drivers that worked alongside the ranks of emergency responders that night.

After we were all forced to wait outside the theater for a few hours following the shootings, the police finally got everyone organized and bussed us down to a local school. The bus drivers were very kind to all of the victims and tried to cater to our needs. Once at the school, the victims’ advocates showed up. They brought us food and water, and helped however they could. For those of us with missing members in our party, they were the ones that organized our information so we could be contacted as soon as anything was known.

Unfortunately, for many of the victims, that was the only night we saw this kind of support. Organizers had promised that there would be counseling available for the victims before a vigil held on Saturday. All of the victims that showed up early, including my group, were disappointed to find that the counseling before the vigil was reserved for the deceased victims’ families. All the other victims, even those who had been injured but released from hospital, would have to wait for the vigil to start and the victims’ advocates to come outside. Until then, we were left to fend for ourselves against the press.

The victims’ advocates did eventually come out to see us, but they hardly knew where to start given our number and the fact we were now spread out in the crowd. They did what they could. They consoled groups in mourning, whether they were at the theater or not. What stung the worst was to then hear the speakers stand up, one-by-one, and talk about how there needed to be support for all the victims, often emphasizing the mental scarring. Despite the diversity of the term victim in their speeches, their policies had a much narrower definition as to who the victims were.

On the day of the vigil, President Barack Obama visited the families of the deceased. He chose not to attend the vigil because he knew he couldn’t be there without pulling the focus away from the victims. His choice not to make an appearance at the vigil, even though it would have likely given him a boost in the polls, shows that he really did have the victims’ best interests at heart.

I only wish others could have been so selfless. There were dozens of politicians on the stage, most of whom didn’t speak. While he didn’t call them all off by name, Mayor Steve Hogan of Aurora stood for two minutes naming the ranks and affiliations of the dignitaries present, several of whom are up for reelection this coming fall. I understand giving credit to all of the first responders who were in attendance, but the long stream of elected officials felt too much like campaigning to the grieving.

For many in Colorado, this incident is hitting to close to home after the Columbine High School shootings. One victim of the Columbine shooting, Samuel Granillo, is working on a documentary about the school shootings. Through it, his goal is to find a way to provide counseling for those seeking it after the shootings at Columbine High School – which is desperately needed for those who still suffer from post-traumatic stress disorder in the wake of it. The funds for the Columbine victims dried up long before everyone had healed. Many of us that were in the theater on July 20th now worry that the support for the Aurora victims will also prematurely disappear.

There is hope; gestures of support have started to come through. Many speculated that Warner Bros. might make a contribution of some kind. On Tuesday, the studio made it official by announcing they were pledging a ‘substantial’ donation, without releasing details of the actual sum they plan to give to the Colorado Community First Foundation Aurora Victim Relief Fund. Many small businesses in the local communities are holding fundraisers for varying charities and victim support efforts. A group that helped bring the first Comic Con to Denver, organized a human wall at the vigil to counter protest the Westboro Baptist Church, even though the church never showed up. The Aurora Rise Benefit Event is being planned by All C’s Collectibles Comic store in Aurora, Colorado. Comic publishers including DC Comics and Image Comics have contacted them to pledge donations. The event is still coming together, but it so far looks to include a silent auction with proceeds going to victim support.

This outpour of donations from the local, online, and comic book communities has been phenomenal. The biggest worry is that the funds won’t reach most of the victims. My message to the politicians is simple: Have some class. Stop using this tragedy to get reelected. The best thing all the politicians can do now is to make sure that the support for the victims is allocated appropriately. There are several victims who have no way to pay their substantial medical bills, and many more that will need therapy for years to come.

In the final segment, I will discuss the ways in which social media has affected the tragedy. On a large scale, social media has created the most support for the victims. That isn’t to say there isn’t a downside to the internet hive mind.

Back Row Perspective Part 2: An Aurora Theater Survivor’s Message To The Politicians