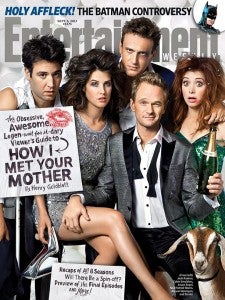 The week after Joss Whedon and Clark Gregg covered Entertainment Weekly with a new image from Marvel's Agents of S.H.I.E.L.D., a series on which Canadian model and actress Cobie Smulders appears as Agent Maria Hill, her role from Marvel's The Avengers, she's made the cover of the magazine herself.

That's because Smulders, who has spent the better part of the past decade playing Robin Scherbatsky on CBS's hit sitcom How I Met Your Mother, is joining the rest of the cast in making their victory lap ahead of the start of the show's ninth and final season.

Besides appearing at San Diego Comic Con International for the first time last month, the gang have been doing interviews all over the place--including this week's Entertainment Weekly.

Of course, EW tends to have more than the one featured story on its cover; the top of the page is generally peppered with tantalizing bits teasing what else is inside. Last week it was the Fall Music Preview, Game of Thrones and Academy Awards speculation (with extra added visibility because those stories used names like "Bieber" and "Oprah" in their subheads). This week?

Well, this week Marvel's top-ranking female S.H.I.E.L.D. Agent shares the cover with only one "non-featured" story, and we're sure you can guess what it is: Ben Affleck is Batman, and the fandom has reacted...about the way you'd expect it to.

We're frankly a touch surprised that the Time Warner-owned Entertainment Weekly didn't have the first interview with Affleck on the subject.

The magazine is due on the stands tomorrow. You can get a look at the cover itself above.