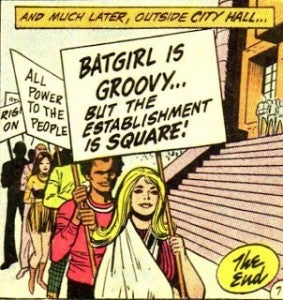 Gail Simone confirmed rumors that she had an announcement to make today when, just minutes ago, she took to Twitter to post the message, "Here's a thing. Gail Simone is the new Batgirl writer."

There's been no official comment from DC Comics yet, but Simone tweeted a pair of follow-ups to address the question of whether she might be joking:

"I am driving a snow road, cell is about to cut out, but THANK YOU DC for this privilege and THANK YOU everyone who wanted this to happen!" Simone tweeted, adding, "Also? NOT A HOAX."

Almost immediately, her Twitter followers started speculating that, perhaps, a second Batgirl might show up in the New 52, with Simone writing that character instead of Barbara Gordon.

Simone had implied via her Twitter page that the ultimate conflict between herself and DC editorial over Batgirl came down to the writer being asked to do something in-story that she was not comfortable with; whether that conflict has been resolved or whether Simone will simply write the story as part of returning to the title is unclear.

Following Simone's announcement that she had been fired from the title, there was considerable online outcry--not only over her dismissal but in particular against incoming editor Brian Cunningham, who was blasted after Simone told her Twitter followers that he had fired her via e-mail.

It's likely that outcry played a role in getting Simone back on the book.

Or maybe DC just figures that Grant Morrison was right, the world will end today, and they've got nothing to lose.