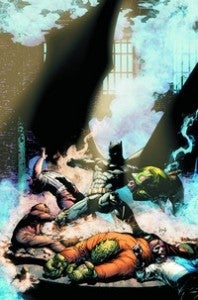 Well faithful readers, another week, another visit into the newly imagined DC universe! This week sees quite a number of big name titles hit the stands, and we're going to start things off with a look at the Scott Snyder-penned Batman #1. So far all the bat books have been quite good with one notable exception (sorry Batwing), and many are curious to see just how this newly imagined world of Bruce Wayne's Gotham City stacks up to the likes of Detective Comics, Batgirl and Batwoman. This first issue flies out of the gate with a balanced and seamless mix of gritty, dark storytelling and a dash of gallows humor. Snyder and artist Greg Capullo craft a tale that captures a lot of the dark detective persona that many modern Batman fans have come to expect of the character and the series, whether on film or in comics.

The story opens up in a rather familiar place for those accustomed to Batman stories, Arkham Asylum, the site of yet ANOTHER inmate riot/escape/breakout. If you're put off by the familiar locale, don't be. Capullo's illustrations, complimented by Jonathan Glapion's subtle and effective inks, give a new image to a familiar rogue's gallery. All of this goes along well with Batman's narration, setting up the current view of Gotham City by its citizens, using a host of negative descriptions on the whole. Following the introduction of some pretty cool new toys from the Batcave, Bruce switches roles to the dapper man about town, working and networking in a room full of people with deep pockets and hopefully noble hearts to fund Bruce's new investment in revitalizing this negatively-viewed city. It's in these scenes at the party where the reader is really able to see the effective job that Snyder does of switching between the "Bruce" persona and his return to action that night as Batman, as duty once again calls.

A brutal killing reveals an ominous warning for one of our main characters, and with that some interesting details about the crime scene itself. Readers should expect nothing less, as Snyder is known for his attention to realistic and logical detail when including researched information in his works. The final panels set up an interesting tease for the second issue, as the suspected killer's identity is very close to home for Bruce. The issue succeeds for many reasons. There appear to be, whether intentionally or not, some Frank Miller touches to the art that add to the dark and gritty feel of the series in this inaugural issue. It's an angular book, not only in art but in story, as we are reminded about the harsh, sharp world of Gotham City in more ways than the one. The dialogue is crisp and on target, and the art complements this vision of Gotham nicely. The issue hits all the right notes in pleasing long-time fans and readers of the character with those who may have never picked up a Batman comic before now. Grade: A+