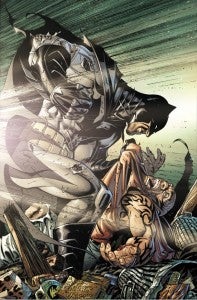 DC Comics has announced that Batman #18 will have not one but two guest artists. Instead of Greg Capullo, who normally draws the series, Batman #18 will be drawn by Andy Kubert and Sandra Hope.

Greg Capullo isn’t leaving the series, as DC Comics informs us that he will be back with Batman #19. It’s just part of DC’s program to highlight guest artists, as done earlier this year with Becky Cloonan.

In Batman #18, Batman is in danger of losing his humanity in the wake of an unspeakable tragedy. Also, the character Harper Row will be appearing.

Batman #18 To Have Guest Artists