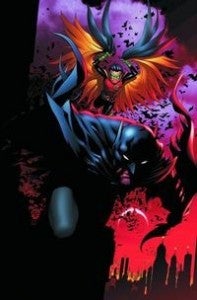 Another major book of the DC relaunch landed in stores this week, and it's Batman and Robin #1. Along the likes of Action Comics, Detective Comics and Batman in anticipation, Batman and Robin gives us Bruce Wayne, the original Batman, back in the saddle fully with son Damian by his side as Robin. The pair have always had a complicated history, with Damian's cold and arrogant persona not always mixing well with Bruce's sense of mercy even for the weak and villainous. That contrast of styles is played up in this first issue in a way that boldly and clearly demarcates the differences in Bruce and Damian's personalities, almost to the point of shrillness, but the overall issue is saved by a scarily effective villain who is mostly unseen for the issue's duration.

Most of this initial issue is devoted to exploring the dynamic between Bruce and Damian, which is obviously a mix of Bruce's calm and paternal patience mixed with Damian's brash disregard for his father's past and his obvious lack of interest in adhering to Bruce's rules in the field when they are in their Batman and Robin mode. What makes this an interesting issue, and one of the things that makes it better than it might initially be, is the focus given to Bruce turning the page of sorts, moving past his mourning of his parents' death at a certain date and time and choosing instead to celebrate their lives and the joy they had together. Damian couldn't care less about this lesson, and he makes that clear in no uncertain terms. There are periods where the contrast between them is so dramatically clear and drawn out that I felt like yelling "yes, I get it! They are opposites!" at the page. This is Batman and Robin, not The Odd Couple.

Naturally, out in the field, Robin ignores some direct orders from Batman, causing jeopardy and possible death to the suspects they're after, a direct affront to the values and ideals that Batman upholds. Damian wants trust and Bruce isn't willing to give it yet. That small scene between them finally brings some gravity to the starkly drawn contrast that's been going on between them in this issue, adding just a bit of balance to the story. The more intriguing piece of this tale comes from a very dangerous and sinister baddie, who seems to enjoy, as he puts it, "erasing" Batmen from around the world in a very literal sense. His presence will be quite interesting, as he promises to bring it all home to Bruce Wayne after finishing off a Russian Batman. The premise of the book with this villain is good and hopefully the subsequent issues will bring about a less grating and obvious clash between Bruce and Damian in favor of one that works without trying too hard. Grade: B