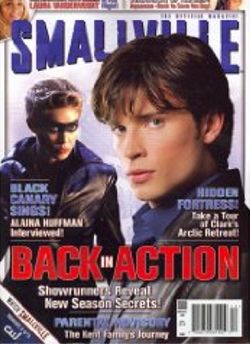 Fans who have spent the last 7 seasons of Smallville waiting for Batman or Wonder Woman to show up should stop right now!

ComicBookMovie.com reports on an interview in Smallville Magazine where series co-creator Alfred Gough revealed that both the Amazonian Princess and the Caped Crusader were forbidden access into Kansas by DC Comics from the very beginning. Other than the two heroes, Smallville writers could cull from the hundreds of thousands of pages of Superman lore.

Gough, who left the series at the end of last season, went on to explain that the writers and producers of Smallville had to earn the trust of Superman's parent company. "We earned the right to incorporate a lot more of the DC mythology, which really lit a fire under the show. We introduced the future Justice League, Brainiac, Bizarro, The Fortress, and Lois Lane. Suddenly, we earned the right to use these toys from the DC toy box to great effect," the co-creator said.

Most recently, Superman villain Doomsday and the founding members of the Legion of Superheroes were featured in episodes of the series' 8th season.

As Smallville has been picked up for a 9th season that will begin later this fall, who knows who from the DC Universe will pop up? Well, other than Bruce Wayne and Diana Prince.