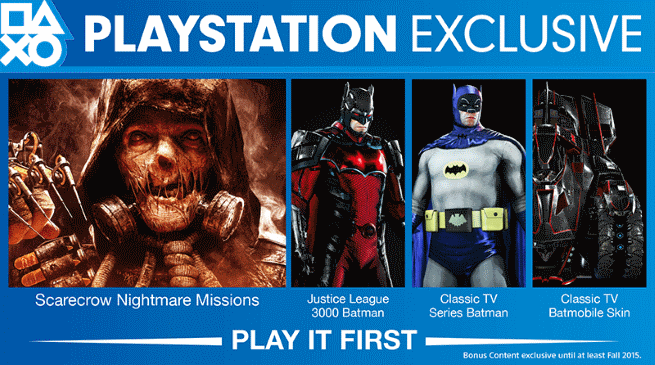 When Sony announced the limited edition Batman: Arkham Knight PlayStation 4 bundle earlier today, they mentioned that PlayStation 4 gamer would also have first access to downloadable content for the game, including new missions and skins for Batman and the Batmobile.

Sony as now revealed what those missions and skins are. As seen on the PlayStation website, the game will have addition "Scarecrow Nightmare Missions" available as DLC, and skins that can send Batman into the future or the past, with a Justice League 3000 Batman skin and a Classic TV skin for Batman and for the Batmobile.

Here's the description of the Scarecrow Nightmare Missions:

As Gotham City falls victim to Scarecrow's fear toxin - transforming the famous city into a twisted, hellish nightmare - tear through the city in the all-new Batmobile and face off against a towering vision of Scarecrow and his undead army as they spread terror on the streets.

These DLC missions and skins are marked as PlayStation 4 exclusives, but the images notes "Bonus Content exclusive until at least fall 2015." Meaning, a few months after release, there's a good chance this content will be made available on Xbox One as well.