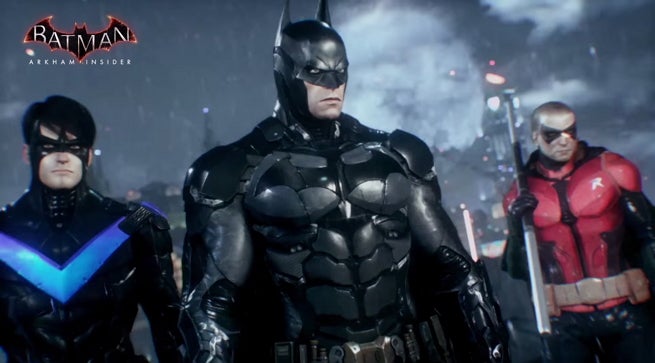 Rocksteady Studios has released the first episode of their new "Arkham Insider" video series, going behind-the-scenes of Batman: Arkham Knight ahead of the game's June release.

This episode sees lead scriptwriter Martin Lancaster and senior animator Adam Vincent break down the "All Who Follow You" trailer for the game, explaining the new Dual Play feature and certain of the game's narrative devices.

"You can seamlessly switch between the two characters, whether it's Nightwing, Robin, Catwoman," Lancaster explains of Dual Play, which allows you to call in assistance from Batman's allies in both combat and predator mode. "It's fantastic because we're able to build these relationships, not just through the cinematic sequences, but right through the gameplay through every aspect of the game."

They also reveal the roles for certain other members of the game's supporting cast. Lucius Fox will be working on research and development for Batman, sending in Batmobile upgrades via the Batwing. The Riddler has decided to match both brain and brawn with Batman, and has developed a robot army. The mysterious Azrael sees that, with the villains taking over, his dark prophecy from Batman: Arkham City has come true. Now he wants to replace Batman and become Gotham's new protector.

Batman: Arkham Knight releases on PlayStation 4, Xbox One and PC on June 23.