In 2009, Rocksteady Games surprised the gaming world with Batman: Arkham Asylum, the first licensed superhero video game to be really good rather than just good “for a superhero game.” In 2011, they took their successful concept and expanded it in Arkham City, giving it the open world treatment and adding more playable characters for certain chapters and game modes. For the latest installment of the series, the reigns were handed to nascent development studio WB Games Montreal, making Arkham the latest franchise to be put on the dual development track model. The result is Batman: Arkham Origins, a prequel to the previous two games that doesn't do enough to distinguish itself from its predecessors, but still manages to improve upon certain parts of their formula.

Arkham Origins is set only two years into Batman's crusade against crime. He is still an urban legend to the population at large, but the mob bosses and criminals that he fights against know him well. One such boss, Black Mask, decides that its time to deal with Batman once and for all and so, on Christmas Eve, he puts a $50,000 bounty on Batman's head. This attracts the attention of eight deadly assassins - including Deathstroke, Bane, Copperhead and Deadshot – who all come to Gotham to try to claim their prize.

While the idea of Batman fighting for his life against eight deadly assassin's sounds like a fun enough concept to carry the narrative, the conceit is largely forgotten as things progress. The first few hours are profoundly lacking in plot, with Batman trying to catch up to Black Mask to end his dangerous game, and occasionally being interrupted by one of the hired assassin's for a boss fight. 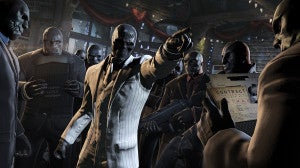 The game doesn't really pick up its narrative flow until the Joker makes his first appearance and you get a sense of what the game is really about: the beginnings of Batman's relationships with many of the key characters from the other Arkham games, primarily the Joker. The game draws inspiration from familiar source material such as Batman: Year One and The Long Halloween, but actually goes further than expected by borrowing a bit from The Killing Joke for its interpretation of the Joker and diving deep enough into the Joker's psyche to touch on the psycho-sexual aspects of his obsession with Batman. The scenes with the Joker are easily some of the best in the game and the series, filling Origins with a sense of purpose and excitement that can often be lacking from its other parts, and Troy Baker does a great job in his first outing as the voice of the Clown Prince, even if he is relying quite heavily on Mark Hammil's interpretation of the character.

Imitation over innovation is recurring theme for Arkham Origins, which does very little different from Arkham City, though tries to amp up the difficulty a bit. The game succeeds with its predator encounters by making the enemies a bit smarter than in previous games. Enemies in these encounters are much quicker to booby trap vantage points and shoot into underground hiding spots, forcing Batman to move about the level much more than he used to. If your quick and patient enough, its still possible to simply hang around the rafters waiting for the enemies to give you an opening, but taking a more mobile and aggressive approach feels much more rewarding.

Origins is less successful in its tweaks to hand-to-hand combat encounters. The game still uses the brilliant free-flow combat from the previous two installments, but varies up the composition of enemy groups and introduces a few new enemy types. The martial artist enemies, with attacks that require multiple counters before they are completely blocked or avoided, are a welcome addition, enhancing the sense of flow and need for timing that has always been the best part of the combat. However, this flow is too often interrupted by an overabundance of enemies with unblockable attacks, such as enforcers or thugs on venom, or with armor or shielding that make them difficult to hit. Its too difficult to combo effectively against these types of enemies without being ganged up on by other thugs, but if you focus too much on taking out the other thugs then the big guys will run all over you. This puts an emphasis on very defensive combat, causing the plentiful combat encounters to drag out a bit and become tedious. Later in the game, Batman acquires upgradable shock gloves that swing the balance issue in the other direction, making all of Batman's attack's unblockable and making most combat encounters a breeze so long as you can last long enough for the gloves to charge. The issues with combat are all the more noticeable because Origins lacks any major exploration challenges during its main story missions, making the gameplay path a string of combat and predator encounters separated, in most cases, by little more than a grapple swing or two. 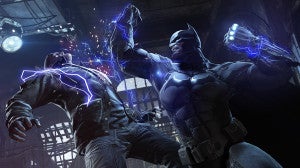 Origin's boss battles are easily the best in the series. The battles with the assassins are tight and intense, eschewing gimmicks or spectacle for intense hand-to-hand encounters that test your skill with the games underlying combat rather than introducing you into an almost mini-game like set piece. This does wonders for the game's immersion; the gameplay never needs to justify itself to the narrative and the story doesn't once contort itself into an uncomfortable or unbelievable shape in order to make sense of the gameplay. There a very few games that achieve this kind of ludo-narrative balance, and maintaining it is one of Arkham Origins' most impressive feats.

Arkham Origins is more interactive than evolutionary, content to simply be "another" Arkham game rather than pushing the series forward into someplace new. Even so, the game offers some of the best writing the series has seen – despite its narrative pacing issues – and some of the most focused game design in the series with its boss battles – despite the more repetitive and unbalanced aspects of its regular combat. For die hard fans of the series, the Joker's scenes alone will make the game worth the price of admission. For more casual fans, the rock solid design of the previous Arkham games is still present, just stretched a bit thin. If you can deal with the games more familiar elements, now reaching the point of mundanity, then the game will reward you handsomely with fits of brilliance, but be warned: its something of a long walk alone in the snow to get there.