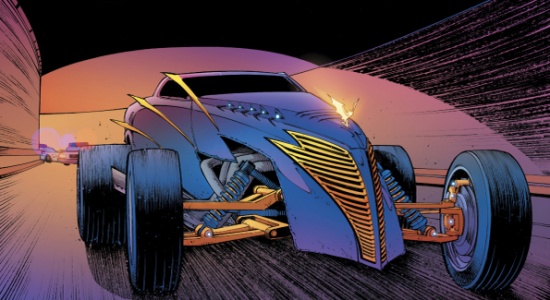 Batman artist Greg Capullo's "Zero Year" Batmobile design is now out there in the world, thanks to a sneak peek at the Lost Angeles Times's Hero Complex blog. Capullo, who began his career working at Marvel and moved to DC work after establishing himself as a star in the early days of Image Comics, has had the distinction of being one of the only artists to reinvent the Batmobile twice, both times for in-continuity tales. Besides "Zero Year," he also redesigned the look of the Batmobile and much of the rest of Gotham City at the start of the New 52. As part of the "Zero Year" event story, Capullo has also had the opportunity to reimagine Batman's earliest costume, giving the Dark Knight something that's reminiscent of Bob Kane's earlier designs but with a modern take. "We wanted it to be something where you'd see it and be like … 'What the hell is he driving this showy car?' in a way that both said race car and almost rocket and something that a young person would make with all kinds of tricks to it and something colorful, not something black and dark, something that's almost in your face as if daring you to catch it," series writer Scott Snyder told Hero Complex. "Greg Capullo, I think, did some amazing work on it. We did a lot of drafts. … [Laughs] I actually asked FCO to try coloring it yellow with black details and bats, and it just looked so crazy that we killed it, because it looked like he was driving a bee. … We had to cut a little bit closer to convention. But we feel like we've done a good job. I feel like they've done a terrific job making something that doesn't look like any Batmobile prior." Batman #25 is on sale Wednesday.