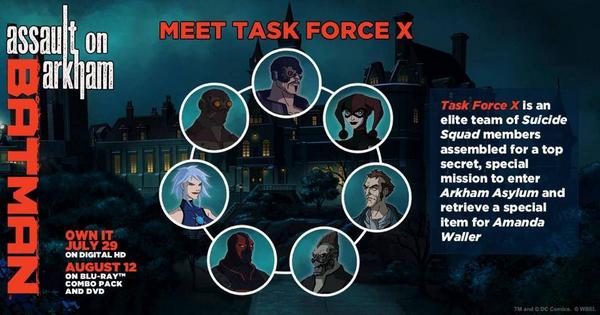 The KGBeast will appear as part of the Suicide Squad in Batman: Assault on Arkham, a PR rep for Warner Bros. Home Entertainment has confirmed via Twitter.

The image above, which appears to be official, was passed along to ComicBook.com from the BoyNerdGeek blog. They also pointed out that Gary Miereanu, who oversees publicity for the DC Universe animated feature films (and emceed the Superman 75th Anniversary panel at Comic Con last year) had tweeted the following, which serves as about the clearest confirmation you're going to get that a previously-not-mentioned character will appear in a film coming soon:

.@Android00154 Actually, @nolan_north does double duty in #BatmanAssaultonArkham as both KGBeast & Cobblepot in distinctly different accents

The character, whose alter ego Anatoli Knyazev appeared throughout Arrow's second season as a recurring foil for Oliver both on the island and in present-day Moscow, will appear as part of "Task Force X," the Suicide Squad, a group also seen on the hit CW drama. He will appear in an upcoming arc of the recently-relaunched Suicide Squad comic book series, as well as in an issue of Aquaman and the Others due in stores in October.