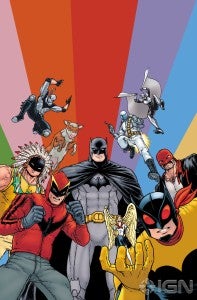 On Monday, DC Entertainment will publish their solicitations for August product, which means that for the next three days we'll be getting rumors, teases and exclusive previews.

"It's another Batman Japan story, and it's the first comic that I'll have written and drawn in quite some time! I'm psyched!" Burnham said of his story in the special. "It's not finished yet, but I promise it'll be chock full of nonsense. I'm going to see if I can imagine what would happen if Will Eisner and Go Nagai made comics together!"

Batman Incorporated Gets One-Shot in August

Iron Man Knew About Other Realities In The MCU Before Avengers: Endgame Heist

Marvel's Avengers: How To Get Your Free Items