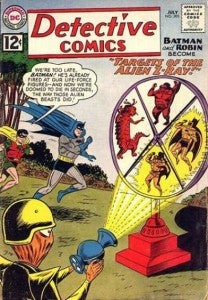 While this sounds like it's just one story and not an ongoing series, it certainly captured our interest. Earlier today writer Scott Snyder tweeted that he would be working with his pal Sean Gordon Murphy on a "Batman sci-fi future story for something special coming up." Sean Gordon Murphy confirmed the announcement, tweeting, "Psyched for my Batman story with @Ssnyder1835 ! It was hard not talking about it for weeks and weeks." Scott Snyder and Sean Gordon Murphy are currently collaborating on The Wake, which is a ten issue mini-series for Vertigo Comics. Snyder also currently writes the Batman series for DC Comics. It will be interesting to see if Snyder and Murphy's Batman sci-fi story is for a special issue of the ongoing Batman series or is part of some other type of Batman special issue.

Peacemaker: Metal Band Wig Wam Was Dropped By Agent Three Days Before "Do Ya Wanna Taste It" Opening Took Off