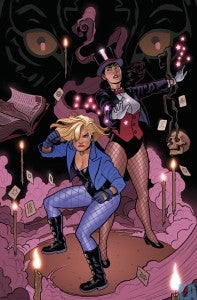 Paul Dini, the animation legend who helped to develop Batman: The Animated Series with Bruce Timm, will team with artist Joe Quinones for an original graphic novel featuring Black Canary and Zatanna. The long-in-development book will be released to comic shops and bookstores in May, according to Comics Alliance, who scored the first finished art preview. The 94-page original graphic novel was announced years ago, with Amanda Conner and Jimmy Palmiotti on art, but that version of the book never materialized as all involved stayed consistently busy. Eventually, pages from the series began to surface--drawn by Captain Marvel's Quinones. The characters, as you can see at right, will appear in their pre-New 52 costumes, marking one of the only times since the relaunch two years ago that DC Comics have been willing to publish such a book. It will presumably be either non-canonical or its status as "canon" will be somewhat hazy and unimportant, as was the case with Walter Simonson's Batman: The Judas Coin original graphic novel.