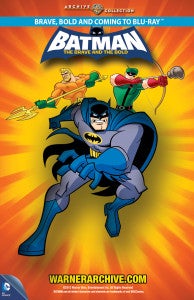 Coming up in conjunction with next month's New York Comic Con, Warner Archive will be staging an event at The Paley Center for Media celebrating Batman: The Brave and the Bold as the Cartoon Network series brings its first season to Blu-ray.

Batman: The Brave And The Bold is Warner Archive Collection’s first-ever animated release on Blu-ray™ disc. Anticipated street date is early November 2013. Warner Archive titles are generally done as print-to-order, keeping the production costs low because there's no inventory to be stored or overprint that the studio has to worry about selling.

Fans attending the October 11 event will have the opportunity to watch an episode and select clips of Batman: The Brave And The Bold, and hear from a distinguished panel that will include voice actor Diedrich Bader, producer James Tucker, 8-time Emmy Award-winning dialogue director Andrea Romano, and Warner Archive podcasters Matt Patterson and DW Ferranti. Moderator Gary Miereanu might even have some unique prizes waiting for a few lucky audience members.

A limited number of free tickets are available for the general public. Fans wishing to receive free tickets to the New York event on must RSVP via email to BatmanBATB@gmail.com.

The body of all fan RSVP emails MUST include the following:

Tickets will be distributed on a “first come, first served” basis, and fans will be notified via email.

Batman: The Brave and the Bold Celebrates Blu-Ray Release With Paley Center Event