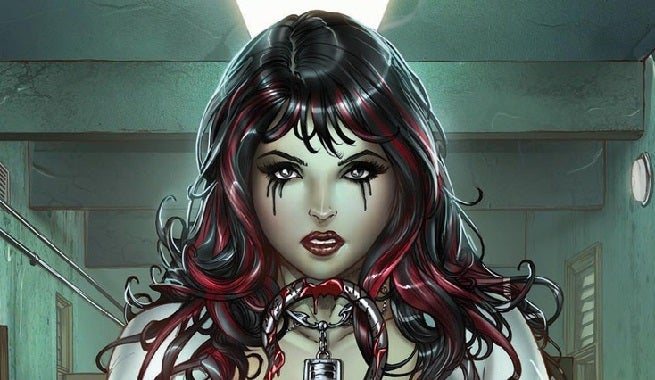 Zenescope Entertainment announced today that it is giving away a free digital download of the upcoming Grimm Tales of Terror #9.

Any member of the Zenescope email list or who signs up to the list prior to Noon EST on March 13th will receive a FREE download of Zenescope's horror comic, the publisher announced today.

Subscribers will also get a special Grimm Tales of Terror wallpaper sent to them along with their comic download.

Grimm Tales of Terror is an anthological horror series, inspired by Tales From the Crypt and The Twilight Zone. The series was created by Zenescope founders and Grimm Fairy Tales and Wonderland co-creators Ralph Tedesco and Joe Brusha.

The ninth issue in particular is interesting in that it features the first mainstream work by Gerardo Preciado, one of the creators behind last year's viral Batman: The Deal and Superman: God's End webcomics.

"I took inspiration from '80s slasher films," Preciado told me of his story in Grimm Tales of Terror via e-mail. "And I think it also has the vintage Tales From The Crypt vibe."

Batman: The Deal Artist Makes His U.S. Comics Debut In Grimm Tales of Terror #9 -- And Zenescope Is Giving It Away