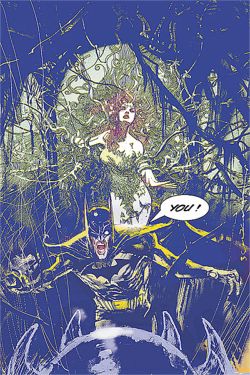 So what is Kevin Smith's new Batman mini-series "The Widening Gyre" like? Based on the first issue, it looks to be a sometimes funny, often violent, and interesting take on Batman and many of his supporting cast. If you haven't read the first issue yet, then be warned that there are spoilers ahead. While the first issue dealt mainly with Poison Ivy's takeover of Arkham Asylum, the central underlying plot seems to be developing as what if Batman had an adult partner instead of the child partners he has had in the past. "The Widening Gyre" kicks off with a short fight between Batman and Robin and Baron Blitzkrieg and the Atomic Skull. The opening sequence is written in the tone of being a really poorly written Batman comic book from the sixties. Thankfully the opening sequence is just setup for what is to come later, and the story quickly goes from innocent to a bloody two-page spread of Batman and Nightwing in a supermarket. After a quick fight that ties back into the opening sequence, Nightwing disappears to leave Batman to investigate a mystery involving a med student that appears to have been murdered by Poison Ivy. On his way to pay a visit to Poison Ivy, who is locked up at Arkham Asylum, Batman reminisces about his previous child sidekicks and thinks that if he ever teams up again that it will be with a well-trained adult partner. When Batman arrives at Arkham Asylum, he finds that Poison Ivy has indeed escaped from her cell and has taken over the Asylum. Batman has some brief interaction with several of his most famous adversaries at the Asylum. Kevin Smith's take on various Batman villains is unique if not always exactly how one might expect them to act. Smith's Poison Ivy is a little bit over the top, but Flagan's artwork of a nude Poison Ivy hanging from the vines helps us to overlook that. Of course, strategically placed leaves keep anything from being revealed that can't be revealed in a Batman comic book. After some interaction (can't exactly be described as a fight) with Poison Ivy, Batman also battles Killer Croc and The Demon. Smith might be at his best in his very gruesome portrayal of The Demon. After a brief battle with The Demon, which Batman is losing, a new character pops up to save the day. The new character presumable is going to be Batman's new adult partner, but it is not revealed for certain. It's hard to judge a mini-series by the first issue alone. Kevin Smith has done a nice job of setting up things in the first issue, and the concept of Batman having an adult partner is one that is very intriguing. It at least gets us hooked into reading future issues to see how everything plays out. According to a DC Comics preview blurb, issue #3 will include appearances by Silver St. Cloud, Aquaman, the Teen Titan, and Deathstroke, and we're really interested to see how Smith works those characters into the storyline.