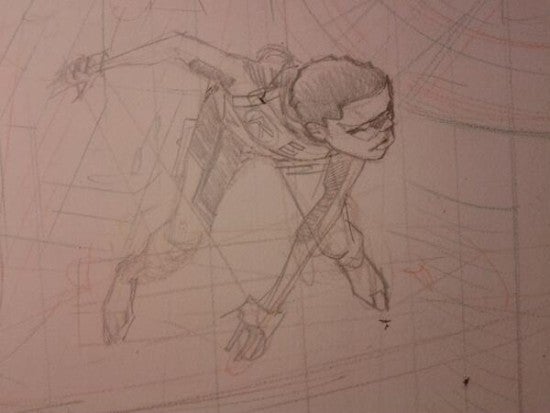 The sketch above comes from Murphy's Twitter account, where he first announced and then illustarted the concept.

While the story is likely an alternate reality and the character not likely to make too many appearances, a popular alternate earth can sometimes get enough traction with the fans to be incorporated into the mainstream continuity. Mark Waid and Alex Ross's Kingdom Come crossed over with the central DC Universe timeline a number of times over the last 15 years or so, and Carrie Kelley, the female Robin from Frank Miller's The Dark Knight Returns, has started appearing fairly regularly in Batman & Robin. At Marvel, the Age of Apocalypse story proved so popular that the world recently wrapped its own ongoing series.

There is presently no Robin in the DC Universe. While former Robin Tim Drake continues to operate as Red Robin, the identity of Robin last belonged to Batman's son Damian, before he was killed in action.

Snyder and Murphy currently collaborate on the critically-acclaimed Vertigo title The Wake.

Batman To Get First Black Robin in Detective Comics #27