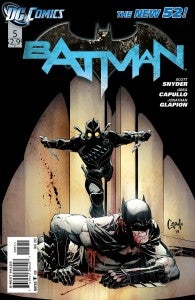 When DC last revealed information about its digital sales in December, Justice League--the comic that has been dominating direct market sales every month since the New 52 began--was sat comfortably atop the list, with Justice League #1 being the best-selling overall book and Justice League #2 being the best-selling second issue of DC's New 52 digital catalog. Batman came in second both times, but according to an interview by Executive VP-Sales, Marketing and Business Development John Rood and Senior VP-Sales Bob Wayne over at Comic Book Resources, the one-month sales (the previous story was cumulative sales since the start of the New 52) for January showed Batman atop the list. Not only was Batman #5 DC's top-selling digital title in January 2012, but after a half-dozen of the fifth issues, the only two titles shown on the top ten list which weren't new in January were Batman #4, coming in at seventh place, and Justice League #4 in eighth. This, in spite of Justice League having been available as a "digital combo pack" featuring a hard copy bagged with a digital redemption code inside since its first issue. Batman (as well as #3 seller Action Comics) got that treatment for the first time in January. It's arguable, then, that Batman #5 may have benefited from the digital combo pack, with readers who were buying an already-expensive $3.99 book opting to spring for the extra buck and get it on their phone, too (it's what I do with Justice League and Action Comics), but in that context it's still notable that Batman #4 is the top selling non-new-release of the month. Whether Batman and Detective Comics--whose cover price will rise by a dollar starting with April's #8s--will be able to retain their digital sales even with the added cover price remains to be seen.