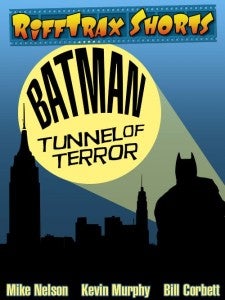 Following on the heels of their recent Batman Takes Over release, the Rifftrax crew of Mike Nelson, Kevin Murphy and Bill Corbbett made a second serial, Batman: Tunnel of Terror, available today.

You can check out the official description and the sample video/trailer below. Revel in the awful, Bat-fans!

They’re back! With Batman Takes Over, the first installment of this vintage serial, we introduced you to obscure superhero characters “The Batman” and “Robin.” Not much is known about them, as they failed to achieve any kind of cultural impact, but luckily this film series -- as far as we know, the only screen representation of Batman & Robin ever made -- survived, so modern audiences can finally learn about these long-forgotten costumed crime fighters!

In Batman: Tunnel of Terror, the second episode, our heroes continue their quest for the elusive Wizard in a frightening new setting. A terrifying tunnel of some kind, you ask? No, why on Earth would you think that? What are you even talking about? Forget tunnels, but the world’s greatest detectives DO manage to get themselves lost on some ordinary park trails, the kind retired grandparents walk for leisure, if the mall is closed. The action in this episode spans planes, trains, and automobiles (regular automobiles, the kind Batman drives in this series, definitely NOT Batmobiles) as the dynamic duo hunt for answers. But one question remains...WHERE IS GABE???

Batman: Tunnel of Terror Gets the Rifftrax Treatment