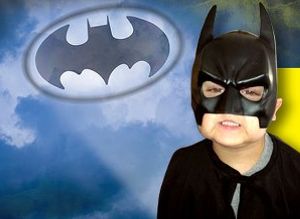 With all of the media attention still focused on The Dark Knight Rises shooting suspect James Holmes, it's important to remember that Batman is a hero for many children. Here's a story about a four year old cancer patient, and how a community rallied together to grant him a wish to meet one of his favorite superheroes. According to WYTV, four year old Jayden Barber suffers from a rare form of terminal bone cancer, and he has been a huge Batman fan ever since seeing the movie. The Youngstown Ohio community rallied together to arrange for Batman to meet Jayden at a local stadium. Before Batman arrived, Jayden got to meet several other superheroes including Spider-Man, Thor, and Wolverine. Then, Jayden lit the bat-signal, and sure enough, Batman arrived to take Jayden for a ride in a $200,000 Maserati Batmobile. A facebook group of over 30,000 members called Jayden's Warriors helped support the event, and they are also trying to get Dark Knight Rises actor Christian Bale to meet Jayden.

Battlefield 2042 Fans May Be Getting a Beta Surprise Very Soon